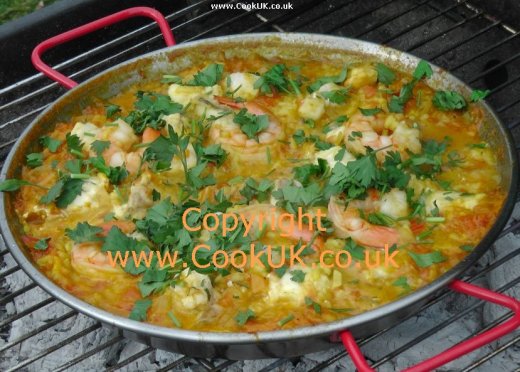 A real taste of the sea with this seafood paella recipe. Easy to cook on a barbecue and paella pan or on the stove in a frying pan. Our pictures, hints, tips and video make this easy to cook.

Paella refers to the pan in which the dish is cooked, see the picture above for a typical example of a paella pan.

The dish originates from the Valencian region of Spain. Originally it was made by farm workers and consisted of rice and whatever vegetables were available. Sometimes snails and rabbit meat were added and for special occasioons chicken would be included. Our typical original Valencian Paella recipe can be found here.

Paella Valencia does not include seafood. However, with the town of Valencia being on the coast of Spain it was inevitable that a sea food version was developed and this recipe is a good example.

Cooking a paella, whatever ingredients are used, involves some basic principles which you can explore on our page here.

One good pinch (15 or so strands) saffron

1 Lemon (for decoration only)

Salt and pepper to taste

All paellas originate from Valencian paella but the Seafood Paella has been around so long that it is generally accepted to be a true paella in its own right. The fish used in this recipe will vary according to where in Spain the paella is cooked so feel free to substitute your own choice of sea food.

Our video below shows us the paella in the traditional fashion on a barbecue using a paella pan. However, a very good paella can be cooked on your cooker hob using a large frying pan using exactly the same method.

There are a few basic principles behind cooking any good paella and we describe these in lots of detail here.

Note that the video below says to add 900ml of stock but in the ingredients above we state 800ml. After cooking the seafood paella with 900ml of stock we felt that slightly less was needed. However, a lot does depend at what temperature you cook the paella and also how long the tomatoes are simmered. Initially we suggest using 800ml of stock and add a little bit more water if the rice becomes too dry during cooking.

VIDEO OF SEAFOOD PAELLA COOKED ON A BARBECUE

Add the olive oil and the chopped onions to the pan on a medium heat. Fry for 5 minutes turning them frequently to ensure they soften but don't brown.

Add the saffron (crumbling it up as you add it), garlic and sweet paprika. Stir it all up well for a minute or so. 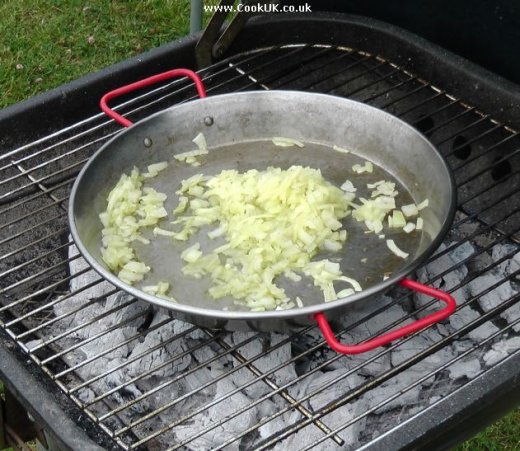 Onions Frying in a Paella Pan

Now add the tomatoes and simmer them for eight minutes. Stir the mixture around the pan frequently to disperse the saffron and paprika evenly throughout the other ingredients.

Add the rice and stir all the ingredients thoroughly for one minute. 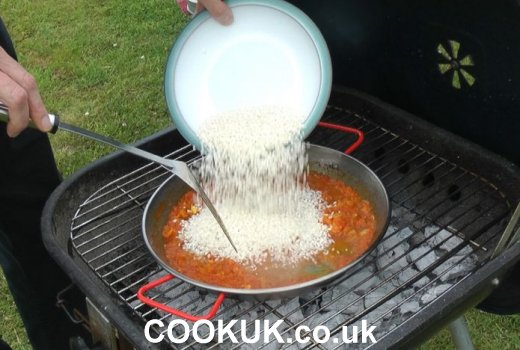 Now add the stock and stir all the ingredients well. Using your spatula ensure that the rice is spread evenly over the base of the pan. Season with salt and pepper.

Leave the rice alone from now on and cook the paella for 15 minutes until most but not all the liquid is absorbed. 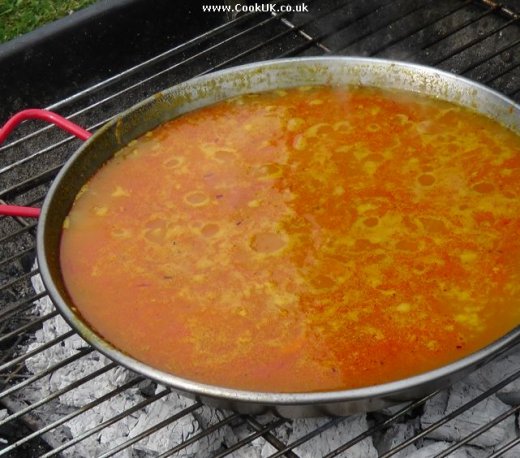 Add the monkfish first then the prawns and settle them into the surface of the paella. Cook for five more minutes.

Garnish with lemon quarters if you want and sprinkle the chopped parsley evenly over the top.

CLICK HERE FOR MORE SPANISH RECIPES
NO RATINGS GIVEN YET- BE THE FIRST
ADD YOUR COMMENTS BELOW ABOUT THIS RECIPE. IT WILL BE ADDED ABOVE WITHIN 12 HOURS
CookUK Home Page
Privacy Statement
Copyright 2006 - 22 CookUK. All rights reserved.