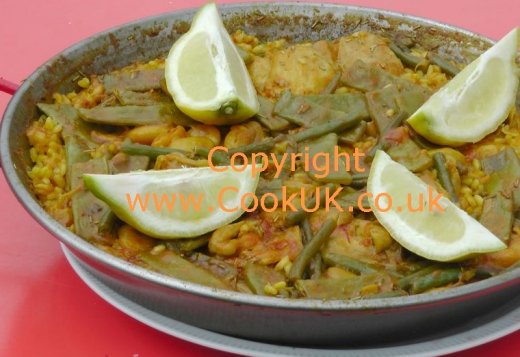 Paella originates from the Valencia region of Spain and a Paella Valenciana is the original form of paella. Time has not aged this paella, it's just as delicious now as it always was.

Paella Valenciana is one recipe where it is important to do the preparation in advance because the cooking process needs lots of your attention and loving care!

First the snails, if you are including them. Preserved snails are easy. Clean them in running water then place in a pan and cover with water. Bring to a boil and cook for four minutes.

Fresh snails should be rinsed clean in running water and added to a pan which contains a tomato roughly chopped, half an onion roughly chopped, 1 teaspoon of sweet paprika and a sprig of rosemary. Cover with water then bring to boil. Turn the heat down and simmer for around an hour. They can then be added to the paella.

Very lightly toast the saffron by placing it in an empty pan on a medium heat for 30 seconds. It will now be very easy to break the saffron into tiny pieces.

The two tomatoes can be substituted for a few chopped canned tomatoes. But the real thing is always best. Cut each tomato in half and then rub each half on a food grater with the skin side in your hand (see the video for a demonstration). Fifteen seconds of so later you be holding just the skin and the flesh will be ready grated.

Top and tail the runner and French beans and then cut into 5cm / 2in pieces.

Top and tail the garlic clove then peel it and finely chop.

Before starting to cook your paella, you may want to browse our article on the principles of cooking a good paella which can be found here.

This recipe describes how to cook an authentic Paella Valenciana but at the same time we offer lots of hints and tips on how you can easily cook nearly the same paella in your kitchen. Throughout this recipe we underline words or phrases so that you can click on them to find much more detailed information about different aspects of paella cooking.

For an authentic paella, especially a Valencian one, you really need a barbecue - charcoal or gas will both do fine. If you don't have a barbecue then click here for some advice. You also need a paella pan which is a large flat pan with low sides.

For example, the original recipe calls for chicken, rabbit and snails but any truly Spanish cook would use what is to hand. If a chicken had recently been killed than they would not hunt around for a rabbit as well, just a little more chicken compared to normal.

So, if snails and rabbit are not readily available in your area then just use chicken. As an aside, snails are often replaced by a sprig of fresh rosemary in traditional Valencian paellas, strange but true.

The problem with adding fresh snails to this paella is two fold. First they require some preparation and cooking before being added to the paella which takes up more time. The second problem is how to eat them! In a restaurant they would be served with a snail fork which enables the flesh to be extracted relatively easily. Without the correct fork the whole process is more messy.

The same goes for the beans used in this recipe but more so. Yes, you need beans but use ones which are in season and readily available. That's what a true paella cook would do in your situation.

The yellow colour of many paellas does not come solely from saffron. In fact, saffron will only add a tinge of yellow colouring to a paella, nothing like the yellow you see in recipe pictures, that is a myth put about by the producers of saffron. Read our article on saffron by clicking here on how to get a good yellow colour to your Valencian paella.

Place the paella pan on the barbecue / hob and add the olive oil. Rub a little salt into the chicken and rabbit then place in the pan. Cook the meat for about five minutes until it is lightly browned.

Keep the meat moving round the pan whilst cooking to stop it sticking to the base. 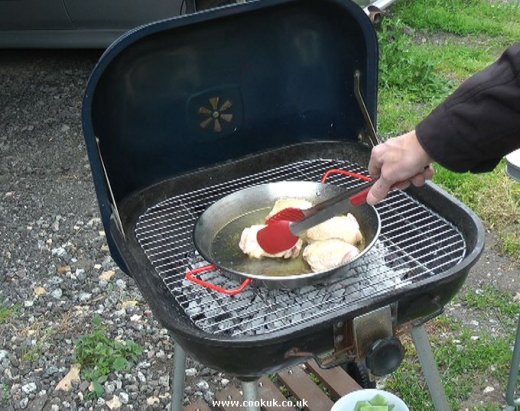 Add French beans, runner beans and butter beans then cook for another five minutes moving then round the pan every minute or so.

Now add the tomatoes, garlic and some more salt for seasoning. Mix those in well with the other ingredients. Cook for a further 15 minutes. 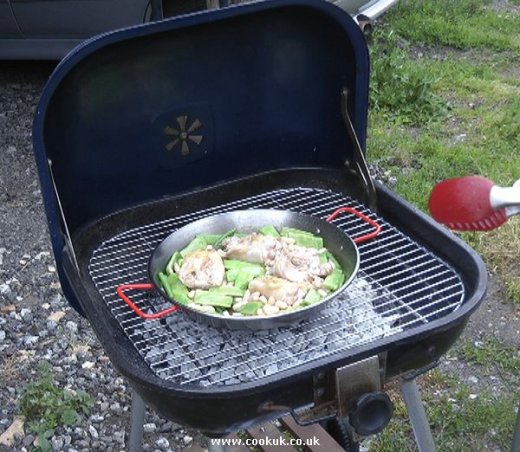 If you are using snails in this recipe (optional) then add them to the paella now.

Also add the sweet paprika (pimenton) and the stock. Stir all the ingredients well and cook for an additional ten minutes. 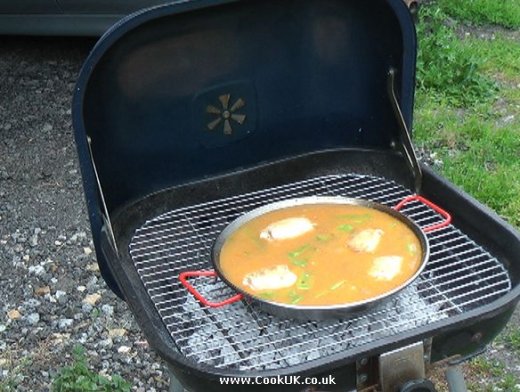 Add the saffron, rosemary and optional yellow food colouring. Taste the liquid and add more salt to taste. If your barbecue grill is adjustable, then lower it to bring the liquid to a boil.

Evenly add the rice to the pan and ease it gently to the base of the pan with a wooden spoon. 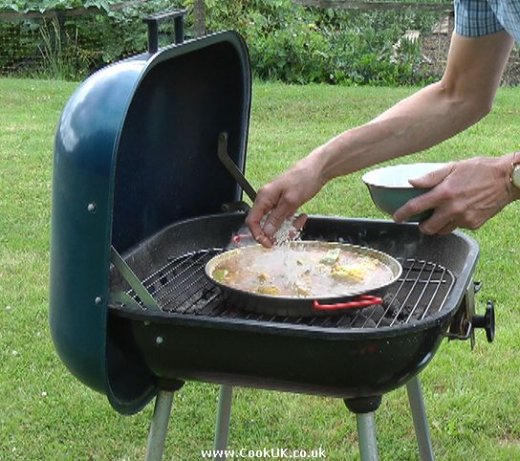 Don't touch the paella from now on. Cook on a boil for ten minutes then lower the heat (raise the barbecue grill) and simmer for a further eight minutes. At this point almost all the liquid should be absorbed. Cook a little more if any significant liquid remains.

Remove the paella from the heat, cover with foil and leave to rest for five minutes. 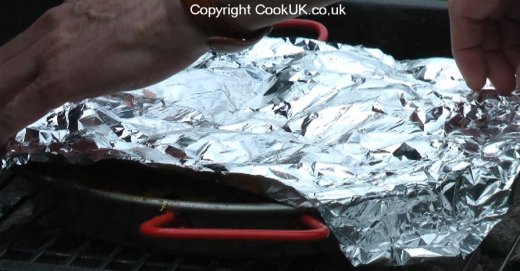 Cook the pealla then cover it

Cut the lemon into quarters and place on top of the paella. Traditionally, paella is eaten straight from the paella pan with the dish at the centre of the table.

Serve with crusty bread and either Spanish red wine or lemonade. 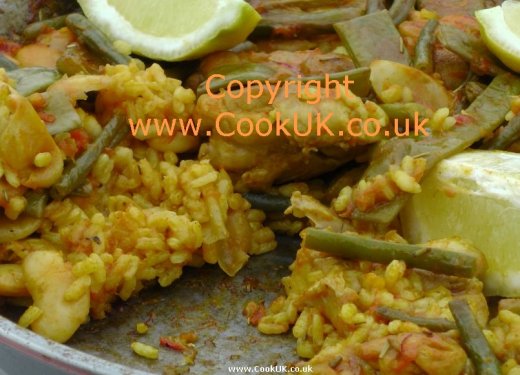 CLICK HERE FOR MORE SPANISH RECIPES
NO RATINGS GIVEN YET - BE THE FIRST
ADD YOUR COMMENTS BELOW ABOUT THIS RECIPE. IT WILL BE ADDED ABOVE WITHIN 12 HOURS
CookUK Home Page
Privacy Statement
Copyright 2006 - 22 CookUK. All rights reserved.