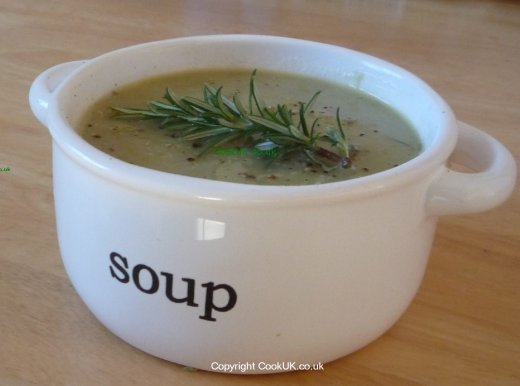 This leek and potato soup recipe can be made with chunky potato bits or with the potato mashed down for a smooth texture. Cheap it is to make, but the combination of everyday ingredients in this recipe is far, far more than the sum of its parts.

225ml / just under half a pint milk or cream

Salt and pepper to taste

Rinse and chop the leeks. The easiest way to chop the leeks is to slice each leek longwise twice (see picture below) and then chop all the leek from top to bottom. Click on the picture below to see an enlarged version showing the size of the chopped leek. The leek has been split four ways down the stem which makes it look a bit like celery but it definitely is leek. 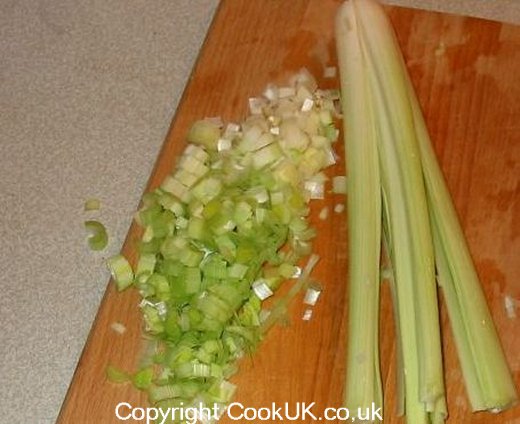 Peel the potatoes and chop them into cubes. Click on the picture below to enlarge it and see the size of the cubes more clearly. 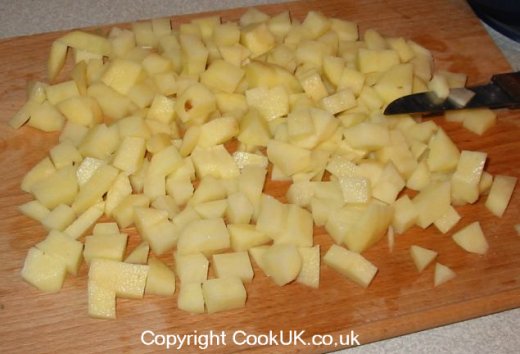 ADVICE FOR LEEK AND POTATO SOUP

The problem with adding cream to the recipe and then freezing it, is that the cream may well separate. In truth, we did an experiment using cream and yes the cream did separate but after stirring it in well it then blended in OK.

This is great food at a very cheap price. It freezes really well, although the potato bits are not so chunky after freezing. All the pictures shown in this recipe can be enlarged by left-clicking your mouse once on the picture. The ingredients will make enough for at least four good portions of leek and potato soup.

Melt the butter / margarine in a pan and add the chopped leeks and garlic.

Fry them over a low to medium heat until the leeks are soft. This will take about ten minutes. Stir frequently so that none of the ingredients brown. 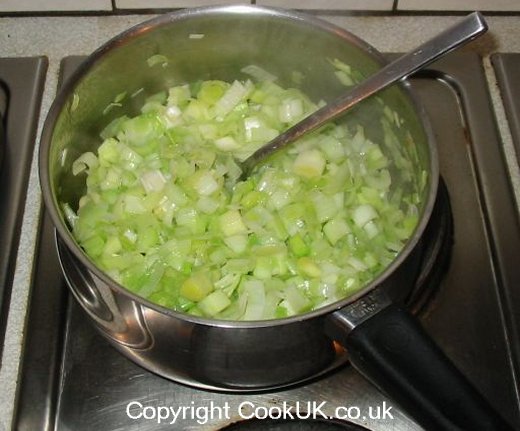 Add all the remaining ingredients to the pan with the exception of the milk / cream. Bring the soup to the boil and then let it simmer for the remaining cooking time. 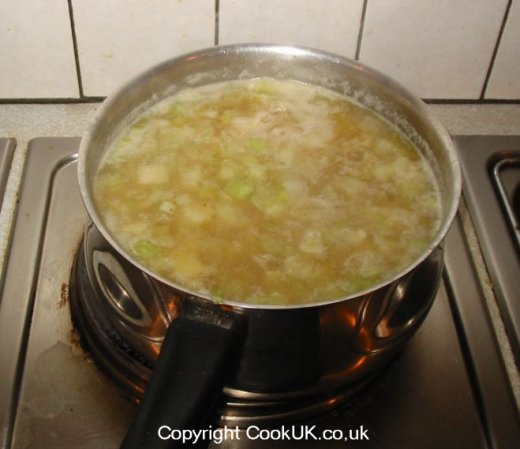 If you prefer the potatoes to be smooth rather than chunky (the most popular way), simply use a masher to break down the potatoes in the pan. 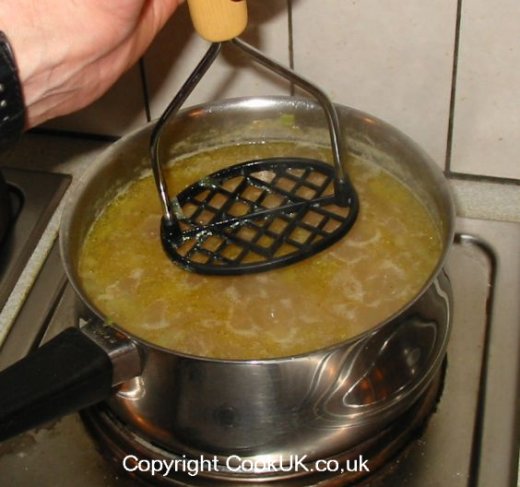 Mashing potatoes in the pan

Just before serving, pour the milk / cream (use milk not cream if you plan to freeze the soup) into the soup and stir well.

If you have parsley sprigs, be a show off and add a sprig to each bowl!

Leek and potato soup freezes very well. If you like chunky potatoes in the soup however, these will not be so chunky when you reheat the frozen soup.

Leek and potato soup will keep up to two months when frozen. 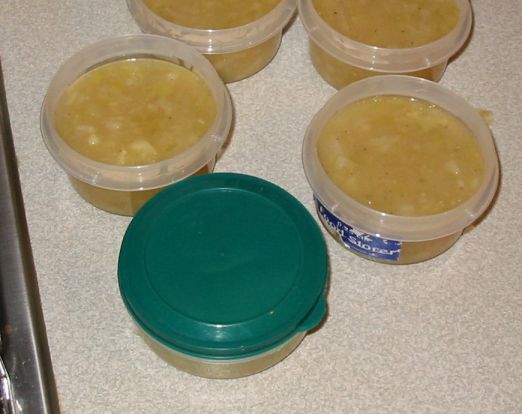 From: Daz
Delicious thanks.

From: Jax D
Wonderful, and so easy. Thank you.

From: Bethan
Brilliant, this soup is so easy and tastes gorgeous, 1st time I've made soup and definitely will make this again.

From: Zoe
I always add bacon and onions, but I'm glad I tried your way. I've been masking the delicate leek flavor. Simple is best. Thank you.

From: Vic
Perfect and easy!
Not Given
From: Danny
Just made this recipe and it is lovely. My dad says he's a manly man and needs meat, so shredded some left over ham joint we had and threw it in and OMG it's even better.

From: Jane
Great recipe , I added chopped bacon at stage one delicious!

From: TW
So simple but so delicious. I have to admit that I put in leftover mashed potato but it still turned out great!

From: John
Really easy to cook and very tasty. As suggested by one of your posters, I added a teaspoonful of mild curry powder which I felt enhanced the flavour.

From: Chrys
Lovely recipe. Thanks for posting.

From: Halle
Just made this, added butter beans for protein and a dollop of cream cheese when served instead of milk, its just melted in and tasted amazing. Really good and filling.

From: Adrian
The tip about slicing the leeks lengthwise before chopping is excellent - it saves so much time. Delicious soup - thanks.

From: Not Given
Excellent

From: Sue
Just made this soup, easy to do and it tastes lovely, also going to make the cauliflower soup, I love simple recipes, thank you

From: MsJu
Lovely, simple, hearty soup. Only reservation was that it felt a little oily on the tongue. Will slightly reduce amount of butter used to saute the leeks next time. Overall, really good soup. Thanks!

From: Chris
Great that one can click on how to make a quick soup and get a recipe that really works. Was as nice as any i would pay for in a good hotel

From: Cat
This recipe was sooo good my husband said he was telling our daughter that I burned it so he could eat hers. luvly jubbly, thanks for this simply gorgeous soup.

From: Pixie
Wonderful soup and such a simple and easy recipe to follow. Always gets the thumbs up in our home. I leave out the cream and milk from The Daddy portion as he's on a diet. Even then it's gorgeous.

From: Linds
The miser in me always tries to eat as cheaply and healthy as possible. This recipe is brilliant!

From: K
Oooo, nearly 3 litres of amazing souuup for the cost of under 2 quid for ingredients in proportion. Much, much cheaper than pre bought and you know what's in it!!

From: Not Given
I love this recipe it is delicious I just wish that it would make more.

From: Anne
Delicious and wholesome and a cheap lunch.

From: Not Given
One thing i always do is had half a pinch of paprika, a pinch of basil and a pinch of chllli flakes before added to stock compliments nicely.

From: Not Given
So easy to make.

From: Maggit
Very simple, nourishing and warming. I made half the quantity given, added a little paprika and basil together with half a chopped onion, and put it through the blender at the end. Served it just as it was (no cream) and it tasted wonderful.

From: Jen
Fab and fast

From: Not Given
The best L and P soup recipe i've come across, yummy!!!

From: Sara
Lovely soup, added 2 onions. Seemed a bit oily, so reduced butter a little - made double quantities for the frezer!

From: Lucas
Very easy to do and absolutely delicious

From: Not given
SIMPLE TO MAKE, TASTES GORGEOUS I'LL NEVER GO BACK TO THE TINNED STUFF

From: Liz
Easy and delicious, love it.
ADD YOUR COMMENTS BELOW ABOUT THIS RECIPE. IT WILL BE ADDED ABOVE WITHIN 12 HOURS
CookUK Home Page
Privacy Statement
Copyright 2006 - 21 CookUK. All rights reserved.