At the top end as far as cost is concerned, the Crock Pot SCCPBPP605 Countdown Slow Cooker boasts a full range of features but is it worth the money?

Submit your recipe to us and we will publish it for all the world to see! Click here to go to your recipe submission page.
This will be a template area and not editable.

Pubs, Restaurants and Cafes in Warwickshire

We are the experts for eating and drinking establishments in Warwickshire. We sample the food and drink at every place we visit and give an expert and impartial review.
Click here for the full list. 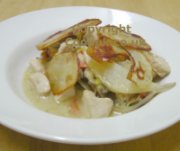 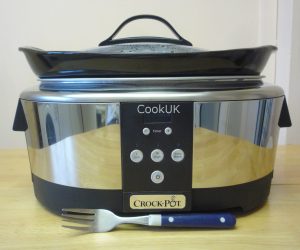 This is a very large slow cooker and most definitely you need to consider the dimensions (see Sizes and Capacities section below) before you buy it. If you have the space to store it on display, it does look particularly impressive! The exterior is a mix of shiny (not brushed) stainless steel and black, solid-looking plastic. The control panel is very solid and the buttons feel like they are built to a high standard. Overall the initial impression is of a slow cooker built to last.

One unique (we believe) feature is a plastic seal on the rim of the glass lid. We assume the reason for this is stop the lid bouncing up and down during cooking, a problem reported by owners of many slow-cookers. It will certainly solve that problem.

How long the seal will last is something we can't say because it's not something that other slow cookers use. Excess pressure is vented through two small holes in the glass lid. The legs at the base of the slow cooker keep it well off kitchen surfaces.

The claimed cooking capacity is 5.7 litres and this was correct according to our measurements. This is easily large enough to cope with meals for a family of five or six with room to spare. The cooking instructions recommend not filling the bowl above three quarters full and this sounds reasonable.

The large size does mean this Crock-Pot slow cooker is not really suitable for cooker meals for two, the food would dry out too quickly. But cooking for four, or two plus an extra portion for freezing, is fine. 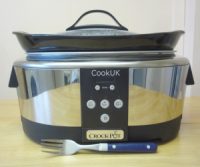 The external dimensions are (our approximate measurements because the manufacturers don't provide any) are height 29cm, width 48cm and depth 29cm which is most definitely on the large size. See the pictures in this article to gain some idea of the true size.

Weight of the total unit is a hefty 5.66kg but the cooking pot is a reasonable 2.7kg given its capacity. The length of the electric cord is about 35cm, just about long enough for most needs and conveniently it can be unplugged from the slow cooker and stored in the cooking bowl. 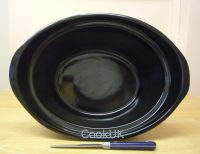 For the practical cooking test we cooked chicken casserole on high for one hour and then five hours at the low setting. It tasted good and the slow cooker gave excellent results. We also cooked chicken and vegetable soup which was excellent.

The controls are easy to understand and operate with buttons for low and high cooking. When one of them is selected simply press the timer + or - minus buttons to adjust the cooking time. When the selected cooking time is reached the slow cooker automatically goes into keep warm mode for a maximum of six hours. After that time the unit will switch off. The timer display counts down the time left for cooking. When in keep warm mode the timer shows how long it has been in that mode.

As far as energy consumption is concerned the accompanying manual is sadly lacking with no information supplied at all. However, further investigation revealed that the Crock-Pot SCCPBPP605 Countdown 6.5 litre Slow Cooker uses 210 to 230 Watts. This is on the high side but still far more economical compared to oven cooking.

The instruction manual gives a fair amount of information concerning the product and is accompanied by a largish slow cooker recipe book.

It's not surprising to find that there are many reviews for this up-market Crock-Pot Countdown SCCPBPP605 slow cooker. In general they are good reviews but there are a few worrying comments. One particularly worrying comment which was raised a couple of times was that the cooking pot cracks and that there is no replacement available. We tried to check out the availability of spare cooking pots and phoned the free phone number given on the Crock Pot website. The response we received was that the number was no longer in service.

We looked for an alternative number and found none at all. It appears that the only method of contacting Crock Pot is by using their email form, a very serious problem for a company of this size and one which would certainly put us off purchasing any of their products.

BACK TO MORE SLOW COOKER REVIEWS


NO COMMENTS LEFT YET - BE THE FIRST
ADD YOUR COMMENTS BELOW ABOUT THIS CROCK-POT SCCPBPP605 SLOW COOKER. IT WILL BE ADDED ABOVE WITHIN 12 HOURS
CookUK Home Page
Privacy Statement
Useful Links
Copyright 2006 - 17 David Marks. All rights reserved.