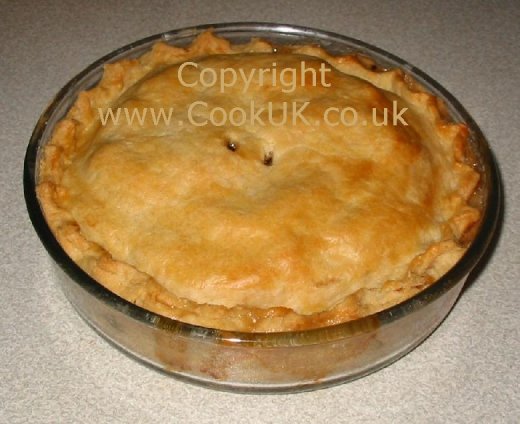 This delicious apple pie recipe is very easy to follow and we help you with detailed pictures, instructions and those valuable cook's tips to make a top quality apple pie.

The variety of apples you use is key to a top quality apple pie. We suggest some excellent apple varieties which are readily available in most supermarkets and your local grocer .

We hope our instructions and video describing how to make shortcrust pastry convince you that even amateur cooks are quite capable of making excellent shortcrust pastry. However, perfectly adequate ready made pastry is available in almost all supermarkets.

85 grams / 3oz cooking margarine (e.g. Stork). Use from a solid block of Stork, not spreadable (see the picture of ingredients below)

Four and a half tablespoons of water

FOR THE PIE FILLING

700g cooking apples (3 to 4 large apples). See the section "Advice for Apple Pie" below for the best varieties to choose 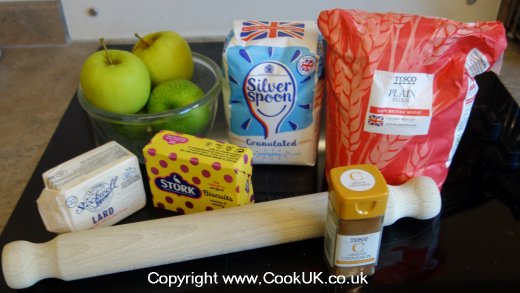 PREPARATION TIME: About an hour if you make the pastry, 25 minutes if you use ready rolled shortcrust pastry

When apples are peeled and especially when sliced, their attractive white colour can very quickly turn a 'not-so-attractive' brownish colour. This makes no difference to the taste, but 'looks' are important. The method described below therefore leaves the peeling and cutting of the apples to the last minute.

Step by step pictures on making the shortcrust pastry are shown in the following recipe but you can also view our video immediately below for a practical demonstration.

Our absolute favourite however would be a combination of one third Golden Delicious and two third Bramleys. The Bramleys contribute considerably to the texture of the ideal apple pie. The Golden Delicious have reasonable texture and also provide that all important deep apple flavour.

VIDEO - HOW TO MAKE SHORTCRUST PASTRY

STEP 1
First, you need to make the pastry which will form the base and the top of the apple pie.

Cut the lard and cooking margarine into smallish blocks, this will speed up the mixing process. Put the blocks of cooking margarine (Stork or similar) and lard (Cookeen can be used if you are vegetarian) in a mixing bowl and pour in the flour. The yellow 'bricks' in the picture are margarine, the white bricks are the lard.

STEP 2
Mix it all together with the tips of your fingers until you have a crumbly texture. Click the picture to enlarge it - all the pictures can be enlarged.

This stage should only take a minute or so but it's one of the joys of making apple pie. It is well worth watching the video on making shortcrust pastry above for advice on how best to mix the ingredients. 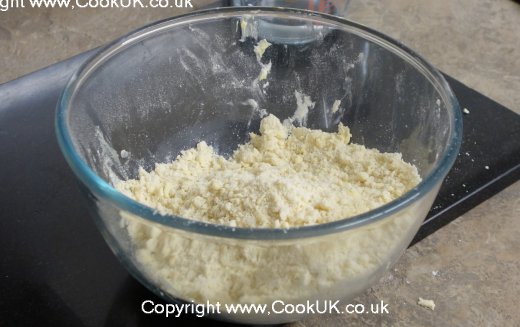 STEP 3
Add 3 tablespoons of water to the pastry and mix it in with a knife, this takes a couple of minutes. Then use your hands to mould the pastry mix into a ball (see picture below). You can tell if the mix is correct because the pastry ball will collect all the bits of pastry from the edge of the bowl leaving it almost clean.

If the mixture refuses to form a ball, add a teaspoon or two (not a tablespoon or two) of water and mix that in.

Wrap the pastry ball in cling film and put it in the fridge to 'rest' for half an hour. It can be prepared in advance and left in the fridge for a couple of days. 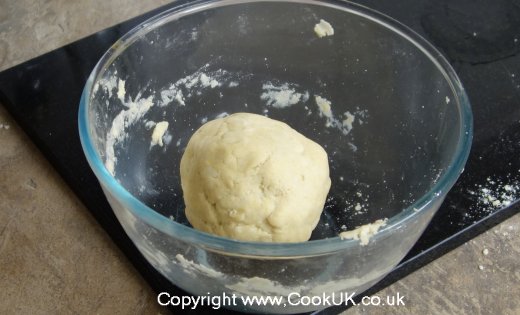 After half an hour, take the pastry from the fridge, and separate roughly two thirds of it. Lightly sprinkle flour on the rolling pin and the surface to be used for rolling out the pastry. Roll the two thirds of the pastry out with a rolling pin so that it is large enough to line the base and sides of the pie dish.

Put the pie dish over the rolled pastry to make sure it is about the correct size also allowing for the pastry to cover th side of the dish. The pastry at this stage should be approximately 3mm to 5mm thick. 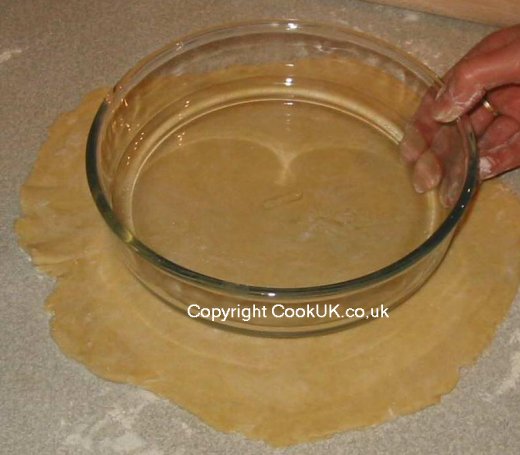 STEP 5
See the next two pictures for a visual explanation of this step and the next one. Both pictures can be enlarged by clicking on them.

The idea is to pick up the rolled out pastry and put it in the dish to form the base and sides of the apple pie. Note that the method used to pick up the pastry can also be seen in the video earlier on in this page. 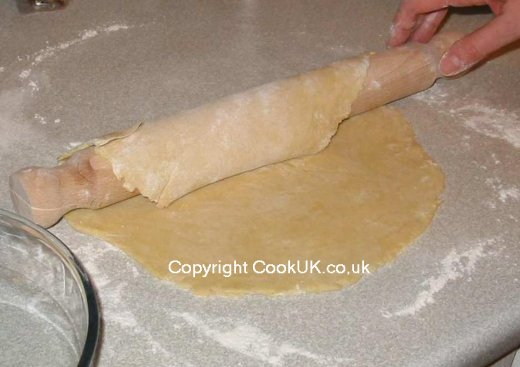 STEP 6
First, lightly roll a third or so of the flattened pastry over the rolling pin. Then support the rest with your hand and transfer it to top of the pie dish.

Gently ease the pastry into the base of the dish and gently firm it round the sides. 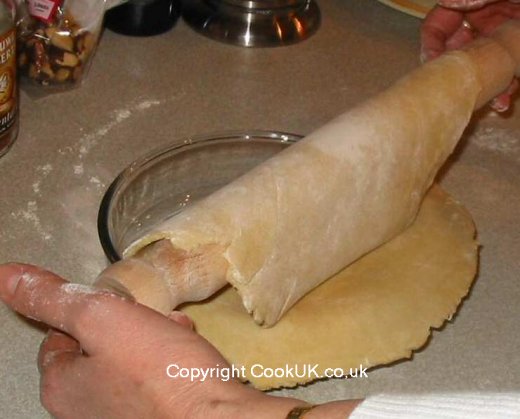 STEP 7
If the pastry does break at all, it's not a disaster, just do your best to cover the base and sides with pastry off-cuts.

Then trim off the excess pastry from the top. Do this with the 'blunt' side of a knife - the blunt side is far less likely to tear the pastry.

Turn your oven on now so that it's pre-heated ready to cook later on. Heat settings are 220°C / fan 200°C / 425°F / Gas Mark 7. Place a baking tray in the oven to pre-heat, this will help the base of the pie to crisp up when it is initially placed in the pre-heated oven. 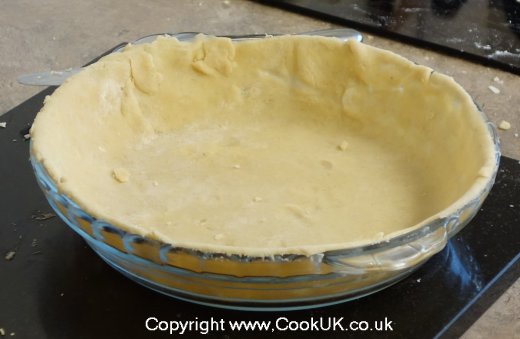 STEP 8
Peel the apples. Cut them into quarters, remove the cores and then slice them. The slices should be roughly half a centimetre (5mm) / 1/4 of inch thick.

Absolute accuracy is not so important. The thicker the slices, the more firm the apple mixture will be when it has been cooked. STEP 9
Place the apples, sugar and cinnamon in a plastic bag and shake well to mix up all three ingredients. This can also be done in a bowl using your hands.

Place the apple slices into the pie bowl on top of the base pastry. Ensure the surface of the apple layer is relatively even.

Using water and a pastry brush (or your wet fingers) dampen the top edge of the pastry. This will help the top pastry lid to attach firmly to it better.

STEP 10
Take the remaining third of the pastry and roll it out with the rolling pin into a circle that is a little bit bigger than the top of the dish.

Transfer the rolled out pastry to the top of the pie using the rolling pin in the same way described in step 5 above for the base pastry.

Tuck the pastry down at the edge and remove the excess pastry using the blunt edge of a knife. 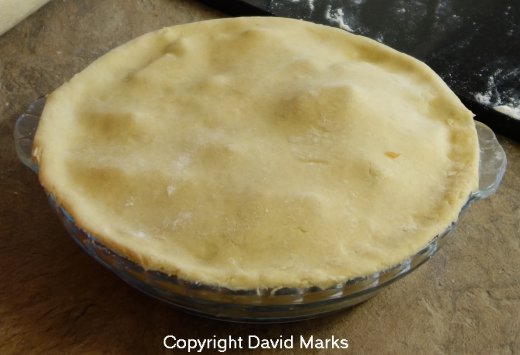 STEP 11
Using both hands, 'crimp' the pastry round the edge of the pie to obtain an attractive finish - see the picture below. 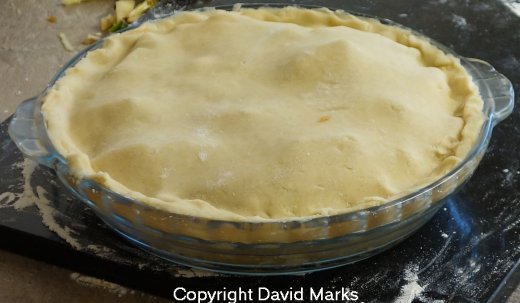 STEP 12
Make 2 holes in the top of the pastry with a knife to allow the steam to come out during cooking and prevent the top going soggy.

Lightly brush the top with a little milk to give the top of the pie a light brown colour when cooked.

Ovens vary so the above timings are approximate. The pie is cooked when the pastry is light brown. 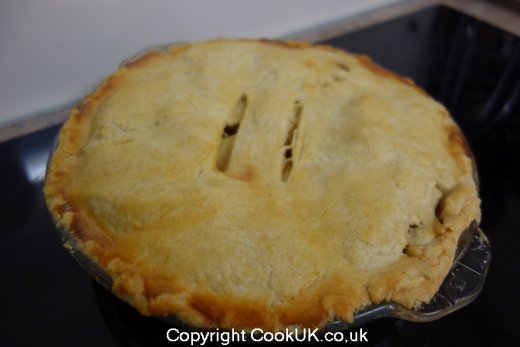 STEP 14
When it is cooked, leave to cool for at least 15 minutes before serving. Beware, apple pie can stay very hot for an hour or so.

Serve hot or cold with ice cream, cream or custard. 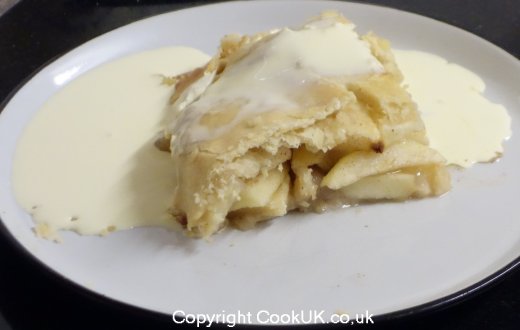 From: Mrs Donna Poynton
Very easy to follow recipe with clear instructions and good pictures. Very happy with the results, thanks.

From: Imogen Furner
It is cool and great for homework! I heard about this web from my friends and they said it is good so i looked and it proves they were telling the truth (from imogen furner age 10!)

From: Arshia Bhakri
So yummmmm and really its very very easy mmmmmmmmmmmmmm tastyyyyyyyyy

From: Kim
Beautifully and simply described! Thank you.

From: Claire
The recipe was very easy to follow, never tried baking any sort of pie before so i hope it tastes good, thanks :-)

From: Immy
This was easy to follow, just hope mine turns out as nice as urs looked!

From: Not Given
Yeah good recipe just needs cinnamon to bring out flavour of the apples.

From: Clare K
Great recipe I made this yesterday and it was a great success everyone loved it :) I had a slight problem with the pastry breaking but with a bit of practise I'm sure it will be fine next time :) thank you :)

From: Jim Mathews
Having a go at his today, I'm using muscavado sugar and cinnamon between the layers of apple.

From: Paula
Having a go at his today, I'm using muscavado sugar and cinnamon between the layers of apple.

From: Not Given
I just put my pie in the oven. Hope it turns out well! :)

From: Not Given
Easy to follow but found that the pastry amount wasn't enough for the size of my dish (a normal sized pie dish) so would use double the amount of pastry next time to make sure I have enough.

From: Suzanne
Yum no more to b said thanks.
Not Given
From: Liz
Great easy to follow thank you.

From: Minicoopergirl
Never had much success with pastry, until now! Came out perfect soo chuffed, can't wait to do it all again.

From: Kirsty
Im doing it now. Its great.
ADD YOUR COMMENTS BELOW ABOUT THIS APPLE PIE RECIPE. IT WILL BE ADDED ABOVE WITHIN 12 HOURS
CookUK Home Page
Privacy Statement
Copyright 2006 - 21 CookUK. All rights reserved.